If you haven’t figured out from my lack of obnoxious facebook posts bragging about being Musky Queen, I didn’t win.  I did, however, get to talk to hundreds of people about Lyme Disease and Mitosynergy.  I also snagged the best spot to hang my poster- right next to the beer line where tons of people were standing and waiting with nothing to do but read it.  I talked to many people who were experiencing strange symptoms themselves, knew someone who was suffering greatly, and even some who had lost a loved one to Lyme Disease.  I’m honestly not that disappointed I didn’t win because I know I made a difference, and that’s what truly matters to me.  If I can change or save even one person’s life by educating people about Lyme, that means more to me than anything.

I expected this to be a silly, fun little contest, but it was pretty cutthroat.  Some of the girls have been running for Musky Queen for years (do you really want to be Musky Queen that badly?) and I couldn’t compete with what they were doing (bribing people for votes, spreading rumors, etc), nor did I want to.  I’m better than that.  It’s really disheartening that some of the contestants and their campaigners were telling people I made up I have Lyme to get more votes (I should add that there were some very sweet girls who were also running, but they didn’t win)…

One of the mean girls came right up to me and said “Do you even have Lyme Disease?”  REALLY???  I showed her my scar and titlebelted in her face, and that shut her up…but I shouldn’t have to prove to anyone that I’m sick.  We may look fine on the outside, but just because you can’t see our pain, doesn’t mean it isn’t real.   Why would I waste my time putting together all kinds of informational materials on this disease if I hadn’t been through absolute hell because of it?  I don’t want it to happen to anyone else!  And if I didn’t have a giant scar, would anyone really believe the seriousness of this disease?

I’ve had enough doctors not believe me, so it’s nothing I haven’t dealt with before, but it still hurts.  Especially since I shared my very personal story with so many complete strangers and put every ounce of energy I had (and I don’t have much) into being at Musky Fest all day.  I wanted to reach as many people as I could.  I’m not upset that I didn’t win, rather, I’m saddened that anyone would have the audacity to say I made up I have Lyme Disease when all I wanted was to help people.

There’s nothing one can do about the ignorance or cruelty Lymies often face, other than try to educate people.  My fear, however, is that someday these same people (the non-believers) may very well find themselves or their children or their family members in my shoes and they’ll wish they had listened to what I was trying to tell them.  I wish they had listened.  Although it was mentally and physically exhausting for me to run for Musky Queen (for those of you familiar with the Spoon Theory, I used up all of my spoons for like a week and then some), and I definitely paid for overdoing it, it was completely worth it.

I need to be a voice for those who are too sick to have a voice.  I need to do what I can to educate people- they can take it or leave it, but at least I know I tried.  Finally, I need to be an advocate for change, because we are facing epidemic levels of Lyme Disease, yet nobody knows a damn thing about it.  So in my eyes, it’s not about winning a contest; it’s about changing the world- in whatever small or seemingly insignificant way I can. 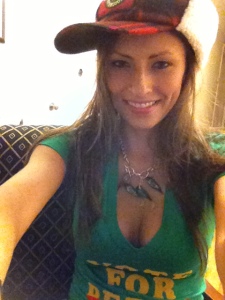 3 thoughts on “Ignorance is not Bliss”