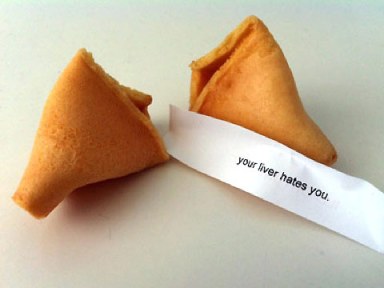 I was pretty set on having my surgery done in Chicago, and had seen doctors from two of the top hospitals there to get opinions on how to proceed in dealing with my liver mass.  At the first hospital, I met with a liver transplant surgeon who told me he had reviewed my films with his entire transplant team, and they all agreed that I would need to have at least 60-75% of my liver removed.  According to them, the mass had infiltrated the entire right lobe of my liver, and therefore, the right lobe and possibly part of the left needed to be removed.   This was shocking and terrifying news, but I felt the opinion must be a good one because it had come from a team of transplant surgeons.  Still, I pursued a second opinion from another top hospital.

At the second hospital, I met with a liver specialist (not a surgeon).  The overall patient experience for me was much better at this hospital, but I did not get specifics about the surgery, other than that it would need to be invasive and some of my liver would be removed with the hemangioma.  The surgeon would need to explain the details to me, so I set up an appointment with him for the following week (I wrote in a previous post about the disappointing and infuriating interaction I had with this surgeon).

Although I had been exploring options in Chicago, my mother insisted that I also go back to Mayo Clinic to get an opinion there.  I was very reluctant to do so because I was not pleased with my first experience there, but since it was my life that was at stake, I figured it wouldn’t hurt to see what Mayo had to say.  I obviously knew of Mayo’s incredible reputation, and was trying not to let the past (or my experience with one physician) cloud my judgment.

As soon as we got to Mayo, they did an MRI of my abdomen.  We were then seen by a liver specialist who explained what the past two had- I had a very large hemangioma (a benign mass) on the right lobe of my liver and would need an invasive surgery to remove it.  It wasn’t an emergency, but because I was in quite a bit of pain and there was the possibility of it rupturing (which could be fatal), it should be done soon.  We said we would like to proceed ASAP, and almost immediately, the entire liver resection team, along with the world renowned head surgeon, were in my exam room.

The head surgeon explained to us that the hemangioma was ON the liver (not in it), and there was a very clear distinction between the mass and the liver.  As a result, he was certain he would not need to remove much, if any, of my liver!  This was fantastic news, especially in comparison to what the surgeons from the first hospital had told me.

Of course, there was no decision to be made.  I would have my surgery done at Mayo.  My surgeon told me he could fit me in the next day if I wanted.  I definitely wasn’t prepared to have such a serious surgery the very next day, so we decided to wait a couple of days, and scheduled my surgery for that Friday.

After my surgery was over, my surgeon confirmed that they removed the hemangioma and just a tiny little part of my liver.  He said my whole liver looked very healthy, and my liver functioning was good.  What incredible news!  I couldn’t be more thankful that I hadn’t gone with the first opinion and undergone a much more risky procedure- one that would have left me with only a small portion of my liver remaining .  Now, I didn’t need to worry about my body functioning with so little liver left, or about having to regenerate so much of it.

As I thought about all of this, I couldn’t help but wonder how the first opinion could have been so off- especially since a whole team of transplant surgeons had reviewed my films and determined my prognosis.  I wanted so badly to believe in the good of these surgeons, and that somehow, it was just a huge error…but I just couldn’t understand how they could have been SO wrong.

It’s possible that they would have done the operation, and once they were inside, they would have realized they didn’t actually need to remove most of my liver – BUT – they were transplant surgeons working in a for-profit medical system.  They get paid by how many surgeries they do, and transplants are HUGE money makers.  I had a very healthy, young liver, and perhaps they saw this as an opportunity to harvest a quality donor liver (60-75% is exactly how much of the liver is needed for a donor).  I don’t want to believe this- it’s terrifying and maddening to think about.  Instead, I’d really like to believe that the Hippocratic Oath is more than just words to every single doctor (I do believe that to most, it is); I’d really like to believe that no doctor or surgeon would ever do anything that was unethical or might endanger the life of a patient, but when money is involved, one can never be certain.  Some doctors aren’t in medicine for the right reasons- to those doctors, it’s all about the Benjamins, baby.

That’s the beauty of the Mayo Clinic model.  Doctors and surgeons are not paid based on how many procedures or surgeries they do.  They are paid a salary, based on patient outcomes, and that’s the way it should be.  It is in their best interests to do whatever necessary, and nothing more than the patient needs.

I really owe my mom (and another good friend out in Cali) for pushing me so hard to go back to Mayo.  I couldn’t be more grateful that I wasn’t on someone else’s operating table.

4 thoughts on “Always Get a Second (or Third) Opinion!”