Pretty gross, but the large white mass was my hemangioma, which was removed. Somehow, I had seen like 30 doctors and specialists who failed to detect this, until an ER doctor discovered it on a CT scan of my chest.

So this is back tracking a little, but I haven’t really written much about my surgery…

My parents, Bryan (another Mayo patient who helped us a lot) and I made our way to Rochester Memorial hospital early the morning of my surgery.  I don’t think I’ve ever been so scared before in my life.  I could tell my parents were sick with worry and fear, which wasn’t helping me relax at all, so it was good Bryan was there to help us all chill out a bit.  I knew this was a fairly risky surgery, and although I believed I was in great hands, the way my luck has been lately, I wasn’t overly confident it would go well.  I even had the ‘if I die’ chat with my roommate Rachel the night before.  Now, we can laugh about that, but at the time it was a very real concern.

We got to the hospital and they took me back to get started with surgery prep.  As I went through all of the pre-op stuff, everything seemed so surreal.  I couldn’t believe what was actually about to happen; everything leading up my surgery had happened so quickly, I didn’t really have much of a chance to process it or mentally prepare.  It was just a couple of weeks prior that they had found the mass.

The nurses were putting in my IVs and explaining the process, and then a doctor came down to ask me if I would consent to something that sounded similar to an epidural.  He explained the risks, which were very rare, but extremely scary (such as paralysis).  I asked the surgeon what I should do, and he said he would definitely recommend it…so, terrified to consent, but also terrified not to, I signed my name on the sheet.  The next thing I knew, I was fairly sedated and curled up in the fetal position with a needle in my spine.  It actually didn’t hurt like I had expected it to.

Almost immediately after, they wheeled me down to the operating room.  At one point, I asked the nurses or doctors or whoever were surrounding me if I should be hallucinating.  One of them giggled a little and said that was ok.  I replied, ‘Good, cuz I’m seeing some pretty cool things.  I just saw a Grateful Dead poster on the door we went through.’  I think a lot of them were laughing after that.

The next thing I knew, I was in recovery.  I don’t remember much from that because I was pretty groggy from surgery and on a lot of strong medications.  Apparently, the surgery went well.  I lost a lot of blood during the operation, but they did this really cool thing called autotransfusion.  Instead of giving me someone else’s blood (a traditional transfusion) they filtered the blood I had lost and gave my own blood back to me through an artery in my wrist.  I had a pretty wicked bruise after that- I actually still do two weeks later, but what an awesome way to handle major blood loss!  I’d so much rather have my own blood than someone else’s.  I know they test donated blood for all kinds of things, but not everything shows up right away. 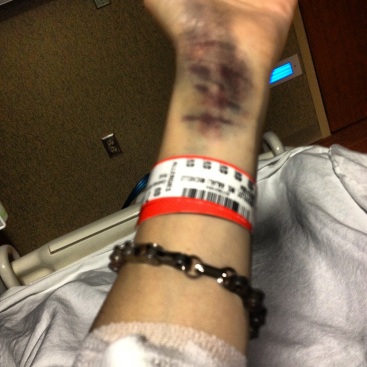 My wicked bruise from the autotransfusion. Instead of giving me a donor’s blood, they filtered all the blood I had lost and gave my own blood back to me- amazing!

One thing I really tried to fight for was to get them to test my liver mass for the Lyme bacteria.  Hemangiomas are fairly common in the general population, but usually don’t grow to the size mine did- hemangiomas are considered giant at 4cm, and mine ended up being 15×12.5×11 cm.  I had a suspicion that the Lyme may have caused my hemangioma to grow to be so large, especially because the liver acts as a filter and tries to rid the body of toxins (such as Lyme bacteria).

Although they do a pathology report after the surgery, not one hospital I talked to would agree to test the mass for Lyme.  They kept saying ‘we don’t normally do that’…’I don’t know if we can’…etc.  Excuses, excuses.  It takes a certain type microscope to check, or they could test the blood, so it wouldn’t have been difficult to do by any means.  I even asked if they would send a sample to a lab that would test it (if they wouldn’t do it there), and they said no.  I didn’t want to argue too much before I was on the operating table and my life was in their hands, so I let it go.

I guess I’ll never know, but the most important thing is that the surgery went well.  I had one of the best surgeons in the world, and he did a great job.  While I was at the hospital recovering, the nurses told me that my surgeon is known for making the the biggest incisions and his patients are usually in the most post-op pain…but if he’s one of the best, the pain is definitely worth it (and hopefully it’ll be gone soon!).

The nurses were right- I have been in a TON of pain…they had to retract my ribs for the surgery, and it seems like they’re a little out of place now (I’m sure they’ll work themselves back into place, but I’m pretty uncomfortable).  Also, you use your abdomen for absolutely everything, it seems.  I can’t express any emotion- it hurts to laugh or cry (and so many times I wanted to, but just couldn’t because it hurt so much), move, and even breathe.  I also have a giant incision, but it looks like they sewed me up pretty nicely, and it’s healing well.

Obviously, this hasn’t been a great chapter in my life (one I would never like to re-live), but I am so lucky we found this before it was too late, and also that I got to the right hospital with a great surgeon.  I have so much to be thankful for, and though I have had some small setbacks, almost every day seems a little better than the last.

1 thought on “Going Under the Knife”