After a long, sleepless night I spent in indescribable pain, I was thankful to be awake to experience such a gorgeous sunrise.

It’s difficult, if not impossible to explain the misery one with Late Stage/Neurological Lyme Disease endures. Words just don’t seem adequate. I will give it my best shot, though- solely to help loved ones try to grasp what we deal with, as well as help other Lymies feel like they’re not alone and that there is hope. No part of me is looking for sympathy- only awareness and an attempt for others to understand how destructive this disease is, if not caught early.  It can be deadly.  Please take prevention and early detection seriously.

I remember my darkest days (sometimes weeks) as the most excruciatingly painful, terrifying, and seemingly endless times in my life. Sure, I would have good days once in a while, but my standards for ‘good’ were so low, most people would probably cringe if they knew  what I was dealing with. On my worst days, I felt like I was going to die, and that is no exaggeration.  My health had deteriorated so quickly that I was literally bedridden and could not even get up to get myself water at times.  I was completely dependent on my parents to care for me, which is something I never envisioned my life would be at 28.

Aside from fighting a horrible illness, one of the hardest parts about having this disease is that people just don’t understand it or know much about it (doctors included).  Lyme Disease is an invisible illness- people can’t see the symptoms, so they don’t believe they’re real…or maybe they do believe it, but they think we’re exaggerating.  They don’t realize that it really and truly destroys every part of  you.  Also, many people don’t understand how we can have good days and bad days.  They assume that if we’re sick, we should always be sick, but that’s not how this disease works.  Sometimes it flares up, and sometimes our bodies are strong enough to fight it.  I don’t understand it either, but that’s the way it is.

Anyhow, I was staying with my parents, who took such great care of me (and still are) and have continued to love me unconditionally through all of this madness.  One of the worst things was seeing how much it broke their hearts to see me in such a horrible condition and be unable to help.  If no doctors could or would help me, how could they?  There were times when all I could do was lie in bed with tears streaming down my face. I was in so much pain I couldn’t even move or talk.

I was having constant fevers, vision problems, hallucinations, memory loss, confusion, chest pain, trouble breathing, etc. I could feel needles stabbing me all over my body,  even in my eyes.  My muscles felt like they were being ripped apart by knives and burning on fire at the same time.  Then came the joint pain- intense aching in my wrists, hips, knees, ankles, etc. Sometimes I’d also be itchy,  or I’d feel like worms were crawling under my skin (which drove me absolutely crazy).  And then there were the muscle spasms and the crushing pain.  If I tried to get out of bed, the soles of my feet were so sore, it was unbearable to even stand on them.  Oh, and painkillers were absolutely useless.  All pharmaceutical drugs I tried seemed to do nothing.

I could feel the Lyme attacking my entire body and mind…it had taken over.  I was having severe anxiety and panic attacks (who wouldn’t?).  I was at the point where I couldn’t even carry on conversations at times- or I’d be looking at someone who was speaking to me and be unable to process anything they were saying.  I was trapped in this hell inside my body.  I was hopeless and felt like there was nothing that would ever be able to save me.  I thought I was too far gone and I honestly don’t know how much longer I could have lived in that condition.  Also, my insomnia was so bad that I couldn’t even sleep to escape the constant pain and misery (I was taking high doses of Ambien, but would still lie wide awake in agony).  I could go on, but I’ll spare you any further details.  It’s difficult for me to write about this, and I’m sure it’s difficult to read. 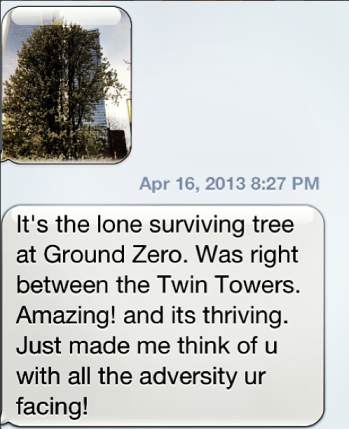 One very encouraging text message a sweet friend sent me 🙂

My client (my angel)- the one who got me accurate testing for Lyme, also recommended that I try this supplement called Mitosynergy.  Her son is a few years older than me and was bitten when he was only 3 years old (poor thing).  I think it took doctors (and he had probably been to hundreds) about 20 years to diagnose him, and by that point he was almost dead.  He did the IV antibiotic treatments and tried almost every other treatment available.  Nothing helped him, at least not for long.  If anything, some of the treatments prolonged or increased his suffering and almost killed him.

When I first met my client’s son, he was VERY ill (this was before I knew I was sick).  I had heard about his condition, but couldn’t imagine all he had been through, especially being sick for almost his entire life.  I have now seen the horrors of this disease and it breaks my heart that anyone would have to suffer so greatly, but a child?  I could barely handle it as a full grown adult.

Anyhow, my client’s son had been taking Mitosynergy for a few months, and every time I saw him he said he felt better.  He also looked so much more healthy and happy.  If he could come back from how sick he was (which was much worse than me), then maybe I had a chance.  I started on the Mitosynergy, and because of my client’s son, I finally had some hope.

My client warned me about the herxing, which is basically a worsening of symptoms due to treatment (if you can imagine anything worse than what I previously described).  What happens is that the treatment causes the bacteria to die so quickly, your body can’t get rid of the toxins fast enough, so it makes you feel much worse before you start to get better.  That was really, really tough to go through- especially because you wonder if the treatment is helping or if you’re just continuing to deteriorate.

It took at least two months or so before I started feeling better (some people feel better after just a month or even less), but I was VERY sick, and had been for quite some time.  Mitosynergy saved my life, but I really owe all credit to my client and her son for getting me the right testing and introducing me to Mitosynergy.  Without them, I don’t even want to think about where I’d be today.

Mitosynergy is made from natural ingredients, and basically helps to get your cells to process energy properly (which they were unable to do before).  It has helped people with all types of chronic pain (Lyme, MS, Fibromyalgia, CFS, spinal cord injuries, etc.).  Before my liver surgery, almost all of my Lyme symptoms had lessened or completely disappeared, and without ANY side effects.   I still had a few lingering symptoms, but I was starting to feel alive again! 🙂

My fear was that post surgery, my symptoms would return because of the trauma on an immune system that was already compromised.  I was hoping I’d catch a break, but have been experiencing increased symptoms (a relapse) since my surgery.  However, it is nothing as severe as what I was once dealing with.  My hope is that these symptoms do not get any worse, and will disappear as I continue to heal from surgery, and I will be completely healthy soon.  I am very hopeful and optimistic about the future.  I think I have survived the worst of this and I finally see the light.

If you suffer from Lyme or any sort of chronic pain, please consider trying Mitosynergy and give it at least a month to see the benefits.  I cannot express how much this product changed my life, and so many others have similar stories.  Please let me know if you would like more information.